Home » A Peek at the Montessori History Curriculum

A Peek at the Montessori History Curriculum 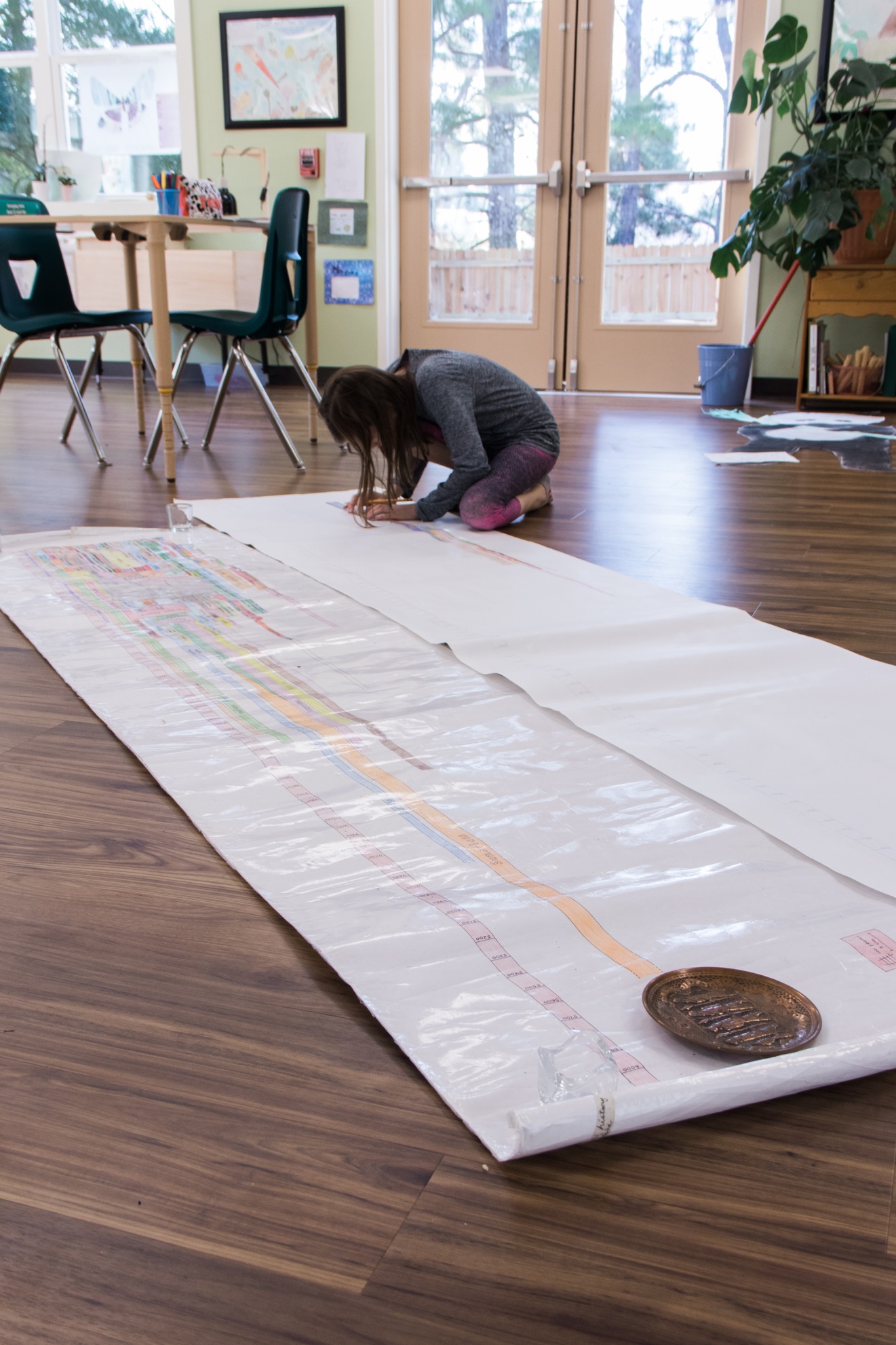 Montessori elementary classrooms certainly do lots of work with math and language, but they also rely heavily on what is often referred to as cultural studies.  These cultural studies include geography, science, and history, and today’s post will focus on the latter.

Think back to when you first learned anything about history.  Perhaps your earlier lessons were based on holidays we celebrate, or on the political history of the nation.  Later (in high school), you may have been introduced to more about the history of the world and expanded upon earlier learning.

The Montessori study of history is much like all its other subjects: we start with the largest, overarching concepts, then gradually zoom into the smaller details.  With that said, we officially begin teaching history in the first grade, and it all starts with the birth of our universe.

It starts with a bang

Imagine this: one sunny afternoon, very early in the school year, the children come in from recess.  The classroom is dark and soft music is playing.  Second and third year students immediately know there is an exciting surprise in store, and they do everything they can to contain themselves so as not to spoil the magic for the younger children.

The guide is at one end of the large rug, and in front of her lay a series of curious items.  The children sit facing her, with the youngest ones in the front so that they may have the best view.  The guide waits for the children to settle into silence, then begins her story.

She tells of a time when our darkest night would have seemed blindingly bright, and our coldest winter would have been warm in comparison.  She continues into tales of particles forming, connecting, and repelling away from one another.  She incorporates information about states of matter and weights of liquids, giving demonstrations as she speaks.  They talk about the vast quantity of stars in the universe, the incredible distances, and eventually, the formation of earth.  The children hear how the particles on earth heated up and cooled, how the water filled in the crevices, how storms raged and volcanoes exploded (they see a model revealed from beneath a black cloth!), and how eventually all was calm and our planet was ready to support life.

In addition to the scientific view of earth’s beginnings, the children may hear creation stories from cultures around the world in the weeks following.  The stories may be read to them, or they may read them or perhaps even act them out.  They will have a sense that there is always more than one version of history.

Following the creation story, there are several materials that give the students a deeper understanding of time.

The Long Black Strip is just that: a strip of fabric that is nearly 100 feet long.  (Dr. Montessori’s original was much longer and had to be unrolled by teachers holding it on a dowel and riding bicycles!).  As the guide unrolls the strip she talks about the beginning of the earth, how the planet changed over time, the coming of the first single-celled organisms, early plants, the evolution of fish, reptiles, amphibians, birds, and mammals.  By the time she gets to the end of the fabric the children will notice a tiny strip of fabric at the end, just a fraction of an inch wide.  She tells them that this tiny strip represents the time humans have spent on earth.  This can be an amazing lesson, even for adults, when they see it for the first time. What a concept to grasp!

The Clock of Eras gives the children their first look at how life began to evolve over the course of time.  Earth’s geologic time periods are represented as if all of our planet’s history were on a 12-hour clock.  The circle chart shows representations of the various eras via colored pie slices.  Check out this fun stop motion video made by some Montessori students:

Time through an evolutionary lens

The Montessori guide may introduce various timelines in the classroom to spark curiosity among the children.  Through a series of discussions, research, reading, and other activities, children learn about the evolution of life on earth.  This history work connects directly to a large portion of the lower elementary science curriculum, which is based in botany and zoology.

These lessons, oftentimes stemming from a material called the Timeline of Life, give children a deep understanding of the connection between our physical world, the living things on it, and how species have changed throughout history.

As you may have noticed, human history is not the focus in the Montessori curriculum.  It is important however, and an emphasis is placed on how humans have changed over time and to the various contributions different groups of people have made.

Much like the Timeline of Life, many Montessori classrooms use a timeline of early humans.  There are also several other areas of human historical study that are covered, oftentimes connecting children to other areas of study in the classroom:

As a final note, you may be wondering why Montessori schools begin teaching such deep concepts at such a young age.  Our reasoning lies in the readiness of the children and a deep respect for the elementary child’s capacity to grasp larger concepts.  Our methods rely less on what has been traditionally taught to children in schools (as well as the traditional timing), and more on what is developmentally appropriate and engaging to children.  We know that elementary aged children, even those as young as 6, are incredibly eager to learn about the world and their place in it.  By giving them a larger historical framework in which they can place the immense amount of historical, geographic, and scientific information they acquire, we are providing them with a better understanding of themselves and the world (and universe!) around them.

Curious about our methods?  Want to learn more?  Please contact us with questions or to schedule a visit today.

« On the Topic of Competition | Technology & the Montessori Classroom »