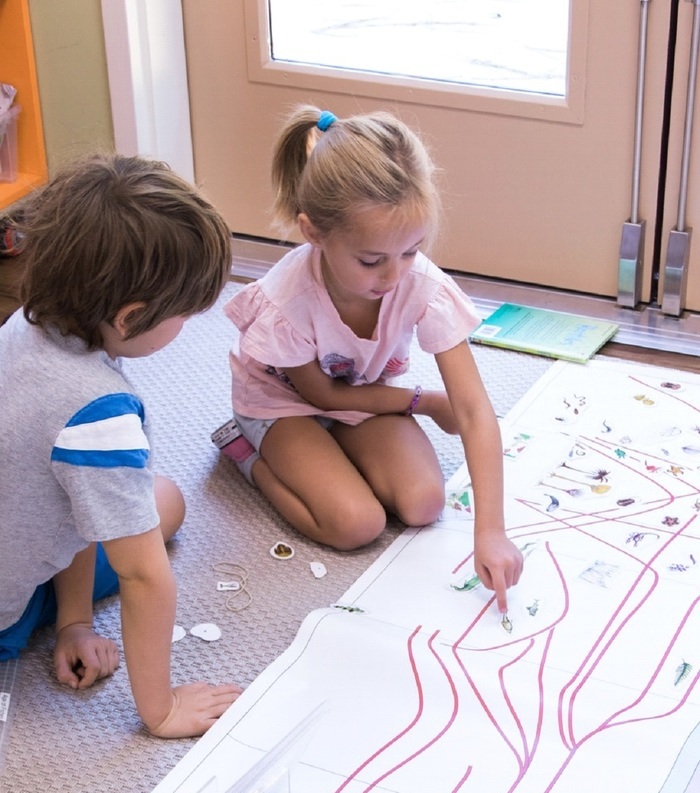 We recently shared an article about Montessori’s elementary curriculum: coined cosmic education. This month we dive a bit deeper to share an interesting concept Dr. Montessori wrote about and considered when developing her work for elementary children.

Cosmic work, or a cosmic task, is that which anything in the universe does to contribute to the greater good, most often unknowingly. Dr. Montessori felt that teaching elementary-aged children about cosmic work throughout Earth’s history would serve as inspiration for them as they define their own cosmic work over the course of their lives. Cosmic work serves as an idea to support the symbiosis of all things.

“They (children of the first plane) have already absorbed the immediate environment and the restricted society they and their families have dealings with. You must try to give the child what he now longs for: the understanding of the world, how it functions and how it affects the life and behavior of humanity.” -Maria Montessori, To Educate the Human Potential

Cosmic tasks can be found wherever you look. A small sampling of examples:

There are a wide variety of ways Montessori guides support this learning in the elementary classroom environment. One of the most evident and impressionistic is via the Timeline of Life material. Mentioned in our previous cosmic education post, this gorgeous color-illustrated wall hanging teaches children about the evolution of life on our planet. Through many lessons and discussions, they learn about various organisms and the impact each has made on the development of Earth and other living things.

Montessori elementary science curriculum focuses largely on biology, including a general overview of the five kingdoms, differentiation between vertebrates and invertebrates, zoology, and botany. During the course of a three-year cycle in a class, a child will learn much about living things and how they relate and react to one another.

“The child will develop a kind of philosophy, which teaches him the unity of the universe. This is the very thing to organize his intelligence and to give him a better insight into his own place and task in the world.” – Maria Montessori, International Montessori Conference. Amsterdam, 1950

Beyond learning the basics of biology, Montessori students study the history of human beings. From the earliest humans to ancient civilizations and the consideration of how we form and function within our societies today, we give children a multi-faceted view of human beings. Learning about our ancestors and how we have organized ourselves over the years gives children a framework into which they can better understand human evolution and impact.

As with most skills and lessons in Montessori schools, our aim is not to deliver facts for children to memorize, but rather to inspire them to ask questions and seek out the answers. This aim cultivates a lifelong love of learning rather than a view that school is just an information delivery system.

Teaching elementary children about cosmic work appeals to them because they are beginning to consider their own place in the universe. When we learn about how each organism (and even nonliving things) have contributed to the success of others, it’s only natural to make the jump to considering one’s own purpose.

In combination with leading children to consider their own purpose and path, we want them to view the cosmic work of humanity as a whole. What is the purpose of humans as a species? Our consciousness gives us the opportunity to consider this task in ways that other organisms cannot; does this mean we can choose the path of our influence or will be unknowingly contributing just like all the others? There may not be a straightforward answer, but it’s certain a fascinating idea for both children and adults to consider.

Dr. Montessori wasn’t the only person to think this way. Many others share similar thoughts. One notable example is Thomas Berry, famed cultural historian, and author. In his book The Great Work: Our Way into the Future, he discusses how humans might consider our influence on the planet and its ecosystems. He presents the idea that our earth is at a critical period of transition, and that humans may have the ability to influence the outcome.

Hopefully, this topic has been as fascinating for you as it is for us. We leave you with a quote from one of Montessori’s most foundational and influential educators: