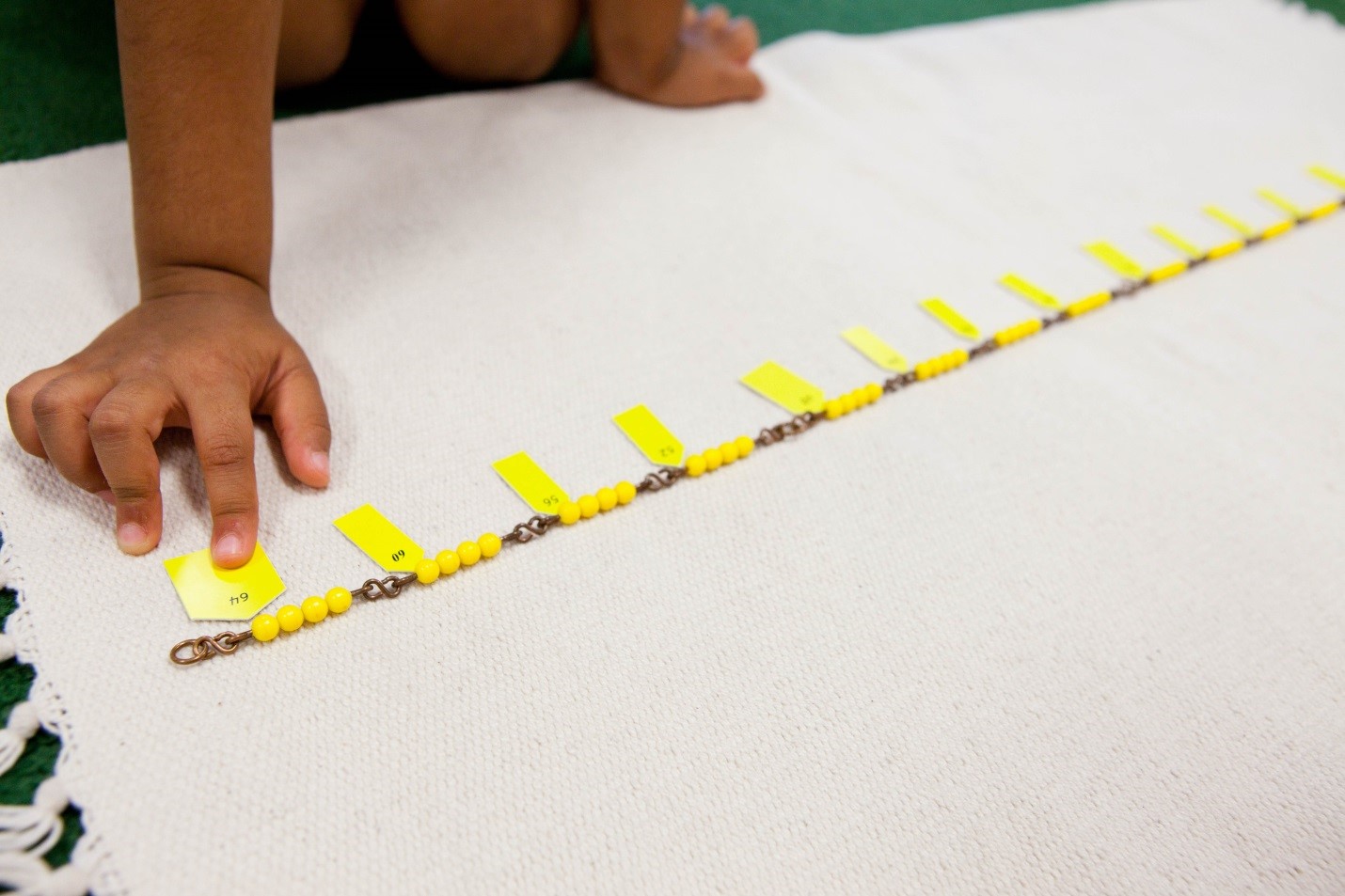 You know your four year old loves their classroom and their work. You know their teachers are guiding them to learn early math skills. But what, exactly, does that look like? And how does it change as they get older? Montessori math materials are nothing short of amazing. While they look quite different than what we used growing up (pencil and paper?) there are intentional reasons for these methods. Read on to learn more…

Much of the Montessori curriculum is based on giving children exposure to concrete materials first, then giving them incremental opportunities to work to more abstract concepts. This is no different when it comes to math.

What do we mean by concrete? The children are able to hold a material in their hands. The materials are symbolic or representative of something else (a number, perhaps), and that symbolism changes over time until children are ready to let go of the materials and find solutions on paper or even in their heads. This idea of mastering a skill without the assistance of materials is what we refer to as abstraction.

At the primary level math starts out simple, but you may be surprised at how much preschoolers are capable of.

Even before a child is able to count, they experience the skill using materials like the number rods, a series of blue and red colored wooden rods that are arranged in a stair-like pattern. Children learn how to count using a variety of materials. The spindle box is an early material with which children place the correct amount of wooden spindles in compartments labeled 1-9. Sandpaper numbers (just like their letter counterparts!) teach children how to correctly form each number to develop readiness for writing them on paper.

When a child is ready to learn about basic operations, there are plenty of materials to support them. Montessori math uses the golden bead material; first to build numbers into the thousands. For example a single golden bead represents 1, a group of 10 beads are strung together in a straight line for 10, and 100 beads are affixed into a flat square. The thousand cube is as large as 1,000 of the original single ‘1’ bead. Once a child is able to build a visual representation of a number, the beads are used to teach basic operations. Young children are able to add, subtract, multiply, and divide numbers into the thousands using this material. They first learn with static problems – that is, with no exchanges – and then move on to more complex, dynamic problems. They quickly learn that ten 1s is equal to one 10, and they do this by holding those numbers in their hands.

Montessori recognizes the importance of memorizing basic facts. While when we were young we may have used flashcards to drill these facts into our heads, the Montessori approach begins by showing children why we manipulate numbers in different ways. Young children appreciate the repetitive nature of the materials, which gives them plenty of opportunities to practice (and memorize!) these facts. The addition and subtraction strip boards show a child visually what is happening when we add numbers. The same goes for the multiplication and division bead boards (which use small beads placed in divots on a wooden board to create an array).

A Period of Overlap

Somewhere between kindergarten and the first year of lower elementary, children are taught to use new math materials depending upon their individual readiness. The stamp game is a classic example.

The stamp game material is a sectioned box with small colored tiles sorted inside. There are labeled green, ‘one’ tiles, blue ‘ten’ tiles, red ‘hundred’ tiles, and green ‘thousand’ tiles. Instead of holding a large cube that actually shows the relative size of one thousand as they did with the golden beads, they are now representing series of tiles that are all the same size, but are differentiated only by their color and number label. Like the golden beads, the stamp game material is used to teach all four operations, with children adding, subtracting, multiplying, and dividing into the thousands. Some children begin this work in their primary classroom and continue when they reach elementary, while others begin once they enter their lower elementary classroom.

It may be interesting to note that there are some Montessori materials that children spiral back to, over and over again, from ages 3 to 12! The bead chains are a colorful, quintessential Montessori material. In the primary classroom, children use them to learn how to count, and perhaps how to skip count. In a lower elementary classroom they are used for skip counting and to help memorize multiplication facts. In upper elementary children use them to solidify concepts like squaring and cubing, although they were indirectly preparing for that work for years previously.

Remember the green, blue, and red tiles of the stamp game? Montessori refers to those as the hierarchical colors, and they are used to teach children about number series. They first appear in the stamp game, but they continue to follow the child through lower elementary and into upper elementary until they have a firm grasp on the idea of the simple family of numbers (ones, tens, hundreds), the thousand family (thousands, ten thousands, hundred thousands), and so on.

After a child masters operations with the stamp game, they move on to use a material called the bead frame, which can teach addition, subtraction, and multiplication. It looks a bit like an abacus, but with ten beads on each rod in the hierarchical colors. After a child masters the bead frame, they are typically ready to add and subtract into the thousands (and beyond!) using just pencil and paper.

To learn larger multiplication problems, children use a material called the checkerboard. They begin small, but eventually work their way up to problems that have three or four digit multipliers. For long division, children use a material that goes by different names at different schools: the racks and tubes, aka the test tube material. Once children master the checkerboard and racks and tubes, they are able to multiply and divide large numbers without materials.

During the elementary years fact memorization continues. In early lower elementary, many children continue to use the strip boards and bead boards of their primary years, but eventually move on to using finger boards and tables in which they place numbered tiles. Children notice the patterns numbers make, giving them more tools to memorize their facts.

Of course, math isn’t just about operations. Montessori students learn about geometry and fractions from an early age.

Did you know that primary children learn the names of geometric solids? They can easily identify not just cubes and spheres, but square based pyramids, rectangular prisms, ellipsoids, and more. As they move into elementary they learn about range of concepts, including studies of angles, triangles, polygons, and so much more. A third grader can easily identify a right-angled, isosceles triangle.

When it comes to fractions, first graders start out simple with an impressionist lesson involving an apple and a definition of fractions that includes how they must always be fairly divided (the connections between fractions and division are impressed early on). They next move on to using fraction insets, which look a lot like the metal insets they used for handwriting preparation in their primary classrooms. Before you know it, many third graders are learning to multiply and divide fractions.

The best way to really understand Montessori math is to see the materials in action. Schedule a visit to watch children using them in the classroom, or attend a parent education session. Contact us for more details!

Check out the stamp game in action:
https://www.youtube.com/watch?v=ogTWJATIJD0

« Montessori Basics: What is Grace and Courtesy? | Raising a Reader »