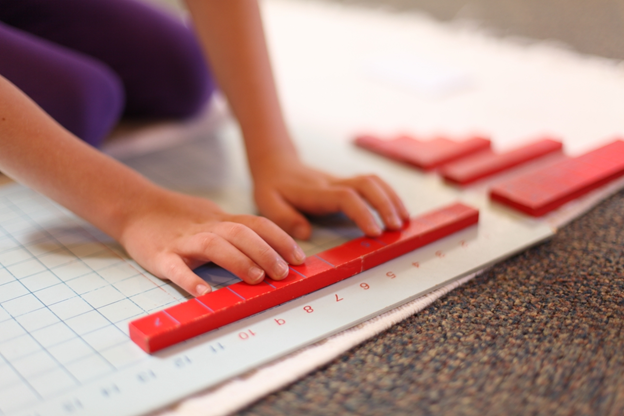 Ahh, memorizing one’s addition facts. Brings back great memories, doesn’t it? For some of us this was a boring and necessary part of our education, but for others it was downright dreadful.

It’s rare to find any sort of information required to be memorized in a Montessori school. We would much rather teach our students why various things are, then have them learn rote processes that mean nothing to them.

Math facts, however, are the exception to this rule…sort of.

We absolutely work with our students to ensure they memorize all their basic facts, we just do it a bit differently. It’s not your typical flashcards-and-timed-drills approach, but a series of strategies that appeals to the child while still reaching the ultimate academic goal.

Memorizing facts is essential to solid numeric understanding and as preparation for efficiently completing more complicated problems later on. As you might imagine, we start this process when children are young, and we use specialized materials to help them feel and envision what the numbers are doing.

Pictured above, this is the first material intended to be used while teaching children to memorize their addition facts. It includes a wooden, gridded board with numbers across the top. Numbers one through ten are written in red, followed by a red vertical line drawn down the board, and numbers eleven through eighteen written in blue. The material also includes a box filled with wooden blue and red strips in varying sizes to be used on the board.

There are many ways to use this board, and a Montessori guide will gradually walk the child through a series of lessons to teach different skills. The basic concept involves the child laying out one wooden strip on the board, then laying another beside it. This allows them to clearly see something like 7+3=10. The strip board is also used in conjunction with the tables of addition (more on those below).

Addition strip board lessons may include:

The addition may be introduced during the kindergarten year, but is used during the first year of lower elementary as well, or longer if a child needs it. 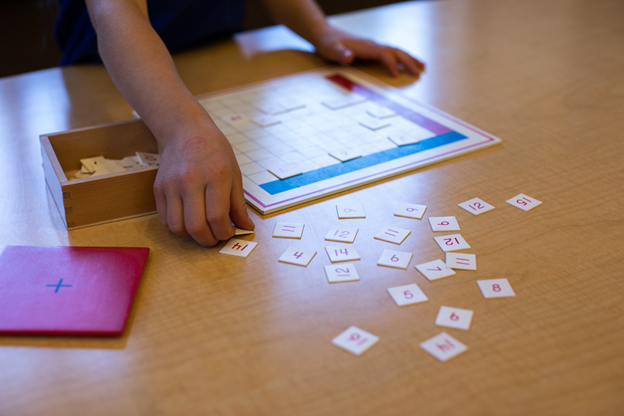 The Tables of Addition

At first used alongside the addition strip board and later used on their own, the tables of addition are another material that aids children on their path to memorization. The material actually includes four square working charts (one of them pictured above), two larger rectangular control charts, and a box of numbered tiles. To decode, the child will complete the work using one of the square charts and use the control chart to check their answers.

The first table of addition is what you might imagine having used on paper when you were a child. Numbers one through ten go across the top and also down the left side. Answers fill in the grid across the rest of the board, so that if you slide your finger down from the seven on top and right from the three on the left, you will arrive at the answer – ten – in the middle. Children can use this as a way to check their answers, too, as they use the addition strip board.

The third table shows all possible combinations. This means there is significant blank space and children get an introduction to the commutative property. This particular visual will help the child see more patterns within the number facts than they may have in the past.

The fourth table is missing even more numbers, featuring each sum only once. The child is at this point required to complete even more independently, but as always, can rely on a control chart to check their answers if need be. These control charts are often nearby but flipped upside down by the child to self-encourage and figure out the answers on their own whenever possible.

There are actually multiple snake games used in the Montessori math curriculum, yet this is the first. It is used after children have had sufficient time to use the other addition memorization materials and have begun to memorize some of the facts. A major aim of this snake game is to revisit the concepts of making ten and exchanging for ten.

The material consists of three wooden boxes. One contains golden ten bead bars, another contains various colored bead bars for numbers one through nine, and the third contains black and white bead bars that will be used as place holders.

The child may lay out bead bars randomly, or they may follow along with cards given by the guide to complete a problem such as 4+2+8+1+7+9=. The colorful bead bars will be laid out in a zigzag formation, taking on a snake-like appearance. The child will start at one end and count beads until they get to ten, then, using the golden ten bars and black and white place holders to take the place of the colored bead bars. This continues until the snake has been all counted up, and the child can count by tens and the remainder to find the answer.

The educator in this video gives a clear demonstration of the process. You may notice him placing the used colored beads in a small glass bowl. Sometimes children will take these out afterward and count them up to check their answer.

Hopefully you have learned something new and interesting from this article. Want to see the materials in person? Reach out today! We would love to chat more.